This is the title I came up with while waiting in the starting corral for the Annapolis 10 miler yesterday. The race cap is 5,300 people everyone just as crazy as the next.

We got to the Naval Stadium at 6:30am (Jon was a course monitor) to wait for our 7:45am sharp start time. To say it was a storm would be putting it lightly. It was a monsoon. Thunder, lightening, windy, pouring rain. So we waited in the car. At about 7am there was a break in the storm and we decided to hit the port-a-pot just in case. As we get out of the car the field where everyone was parked was a mud pit. We did the best we could to not have our shoes fill with water before the race even started. Thankfully the storm was letting up as we got into the corrals, or so we thought.

Right around the time the gun went off to start there was a huge crack of thunder, we couldn’t tell the difference. Everyone was standing around worried about running in a thunderstorm. But it was just a spitting rain and no one seemed to be getting back in their cars. As we made the first turn out of the stadium the sky opened up. It was absolutely, the largest amount of rain I have ever run in (I found out later that we got 2 inches of rain during this race). You could see sheets of rain coming towards you. It was crazy enough that as the wall approached everyone raised their arms and cheered like we were on the downhill of a roller coaster. Thankfully around mile 2 the rain finally let up.

I took it easy the first 2 miles. I had been training on this course but with the rain and wet roads I had decided that my plans for a PR were unrealistic. Honestly, I should not have tried to PR this course. Even the race website says not too:

“The race has been listed as one of the top ten 10-mile races in the country by Runners World Magazine. It is a beautiful run through historic Annapolis and over the Severn River. Notice: This is not a race you are likely to set a ‘PR.’ It is a tough race with a hilly course run in the heat and humidity of a Chesapeake August. Please be sure you are properly trained.”

Actually, due to some logistical issues with the Naval Academy and the city police it was a brand new course this year.

Honestly, our first few training runs took us on the old course. I honestly prefer the new course. It was a challenge.

So I am a Galloway runner. For this run, given the hills, I decided to do a 1:1 (run:walk) time. I set my watch to workout intervals because I wasn’t sure if my gymboss timer was waterproof. And got to it. I started off the race with the Jen’s and at about mile 2 I was lagging behind them. I was trying to go easy on my feet that early in. The first part of the race is a downhill on cobblestones and I didn’t want to slip or pound too hard. It was at this point that I got my headphones out and let the music take me the rest of the way. I caught up to them (there were not THAT far in front) and said “hi” and kept going. I was running this race for me. My plan was to push hard until I got to the bottom of the naval academy bridge (4 mile on the above chart) so that I could walk up it. Use the downhill to gain some time back and then walk up the steep incline that is Richie Hwy.

Honestly, I was feeling good. My stride felt good but I had no idea what my time was. I pushed through all the hills enjoyed the shade of the turn around and then went back to do the hills again. Mile 6 – 7 I decided to gain some time back and switched to 2:1 ratios. This was a pretty level part and mostly downhill and I knew I was going to lose time on the Hwy and bridge again.

Sidenote: I have no real idea how to work my garmin so when I set the interval times I didn’t realize I wouldn’t be able to see anything else. So I had no idea my time or speed or anything like that.

So right around mile 8 I looked at my watch and it said interval 50 of 99. A little mental math (not good after 8 miles) and I realized I could actually PR this course. It was about that time that the girls realized this also and started cheering me on from behind me! (love them!) This is also the time the sun decided to come out and make everything super hot & humid. This was the craziest race weather.

I pushed through the rest of my intervals, although the humidity was making it harder and harder. I finally started my climb (why do race directors think uphill finishes are a good idea???) and passed through the finish area. Grabbed my much needed wet towel and waited for the girls to finish. While waiting I tried to see if I could make my watch tell me my time. When it finally did it said 2:10:19, I almost started crying. You see my 10 miler PR is 2:17:00. My best 10 miler time is 2:11:00 from the Broad Street 10 miler. However, that race is completely downhill so I knew I couldn’t beat that. I wanted to get below a 2:17:00. SO when I looked at my watch and realized on this hilly, all odds against me course, I was able to beat both times I was beside myself.

When the girls crossed the finish there were lots of hugs and high fives! It was a really great race! I honestly don’t know if I will do this race again next year. It is in my backyard so there is always the option but honestly, I don’t know that I can top how fantastic this year was! I have not had a PR in a while and I’m jazzed to train and do another race to see what I can make happen!!

Lastly, cause I would be lying if I said I didn’t do races for the swag and bling. The awesome finishers premium! 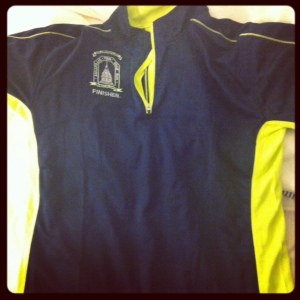 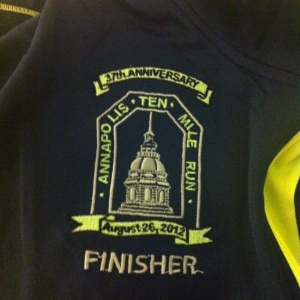 I am a 35 year old living in Maryland. I'm trying to find a balance between a healthy lifestyle and actually having a life. View more posts

This site uses Akismet to reduce spam. Learn how your comment data is processed.